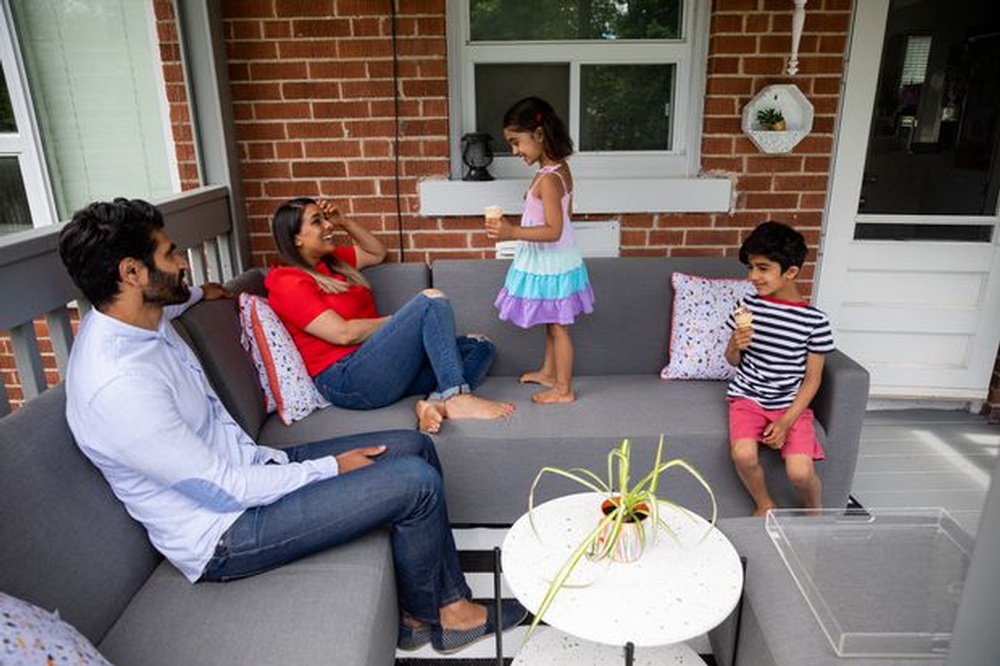 Rikesh Shah and Karen Bhangoo with their kids Juliet and Oliver on their newly built deck in Toronto on June 25, 2020.

At Karen Bhangoo’s home in Toronto’s Etobicoke neighbourhood, there’s one proper workspace – and two adults working full-time since the start of the pandemic. Ms. Bhangoo and her husband have two children, ages 4 and 6. She’s spent many days hunched over her computer at one of their miniature desks, for lack of a better option.

The situation wasn’t ideal, but she kept telling herself it was temporary. When she found out she’d be working from home until at least the fall, Ms. Bhangoo, a communications writer at Telus Corp., decided she needed a home workspace that was, well, workable.

She hired a contractor to extend their tiny deck by 108 square feet. She had it painted and bought a patio set she can work at outside so her kids, who are also stuck at home, can spend more summer days in the backyard.

The whole thing cost about $6,000, but Ms. Bhangoo estimates the family has been saving at least $1,000 a month since pandemic-driven isolation began in mid-March. “We haven’t spent anything for the last three months, so it all went there.”

Ms. Bhangoo’s household has seen a drastic shift in their finances since physical-distancing measures were introduced in March. Money that was spent on nights out, commuting, travelling and kids’ activities is now going toward making the family home a little more comfortable.

Her situation is far from unique. Many households have seen a loss of income owing to disruptions in the job market. But for those lucky enough to have full employment, COVID-19 has provided a unique opportunity for savings to pile up.

At the same time, having the whole family at home all of the time has triggered a marked shift in Canadians’ spending patterns. While spending on gas, travel and transit are among the categories with notable reductions, spending on household items is seeing an upswing.

Overall retail sales fell by 33.6 per cent from the time physical-distancing measures were implemented in mid-March to the end of April, according to Statistics Canada.

A recent analysis of RBC cardholder data found spending dropped by about 30 per cent between late March and mid-April but has since rebounded significantly. By the start of June, it was similar to early June last year – although Colin Guldimann, an economist at Royal Bank of Canada, notes that’s slightly less than a full recovery because before the crisis spending had grown about 6 per cent from year-ago levels.

Further, not all categories are faring equally. “People have really shifted the basket of goods they are buying toward things that make their home more comfortable,” he says. “People have to-do lists around the house .... Now they have a little bit of time to do those projects.”

The RBC data – collected in the COVID Consumer Spending Tracker – show that immediately after the start of the lockdown, spending on “household items” went down about 25 per cent. It is now about 20-per-cent higher than last year’s levels, with particular gains in do-it-yourself construction stores, furniture and appliances.

“[That] is a big swing, especially if you use that 6 per cent yearly growth benchmark,” Mr. Guldimann says.

Meanwhile, spending on travel, parking and transit remain well below last year’s levels. With economies reopening in several parts of the country, spending on restaurants and apparel is gradually recovering, Mr. Guldimann says.

Consumers are also starting to settle into the idea they might be stuck at home for a while yet, according to Toronto-based market researcher Ian Ash of Dig Insights. The company’s recent survey of 1,105 Canadians, conducted May 29 to June 4, found people aren’t optimistic things will get better soon.

Only 13 per cent believe “COVID-19 will be resolved quickly,” almost unchanged from the start of the pandemic. Forty per cent say “better times are not too far off,” down from 46 per cent at the lockdown’s onset.

Waterloo resident Mary Ann Charters says she took the current climate into account when she and her husband let a plan to repaint a couple of rooms grow into a renovation that could cost $60,000. The couple have three children between ages 10 and 14, are still drawing two incomes, and had already been planning to do the work eventually.

“Knowing we would be home made us more willing to let the project grow,” she said, noting it includes a kitchen overhaul, new flooring in three rooms and new furniture. “If we’re going to do it, we might as well do it now while we have the disruption.”

Janea Dieno, a certified financial planner who lives in Saskatoon, says she’s noticed plenty of recent reno projects among her clients and in her neighbourhood. Among her clients, the projects average between $20,000 and $50,000, and are typically things that had been planned for some time.

Even so, she cautions against putting such a project on credit even if household cash flow seems good at the moment: A $20,000 project on a line of credit at 7 per cent interest will cost $400 per month for five years. That may be easy to manage now, but what happens when sports, travel and entertainment start to pick back up?

Ms. Dieno notes interest rates will have to go up eventually, and lenders who deferred mortgage payments will have to recoup their money. “When things go back to normal, it’s not going to be pretty.”

She believes many clients are improving their homes to bring a sense of control back to their lives, and thinks it’s worthwhile to ask whether a $2,000 project could feel as good as a $20,000 one.

“I don’t have many clients who are on target for their retirement – maybe 10 or 20 per cent,” she said. “There’s only so much you can put into a home to make it better.”

Be smart with your money. Get the latest investing insights delivered right to your inbox three times a week, with the Globe Investor newsletter. Sign up today.